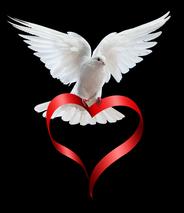 Birds can only be released into the outdoors, for both yours and their safety. Their habit is to form up into a group and circle the local area, before deciding upon a direction in which to fly. This would not be a pleasant experience for either the birds or the guests if released indoors. They will NOT recognize any open door or window as their exit path home.

​Birds are typically released from baskets or cages, but may be released by hand if you so choose. If you intend to hand release the birds at a wedding, we would request that your group stop by the loft at a mutually agreeable time prior to your event, and gain some familiarity in

We will arrive no later than 30 minutes before the scheduled starting time of your event, in order to be set up before the event begins. To ensure a prompt set-up, we require you to designate a contact person with authority to make arrangements when we arrive as we assume that you yourself will be busy on your special day.

Primary concern will be a clear exit path for the birds, and sufficient distance to provide a good display for your guests. Closer is not always better, and the bird’s exit is best viewed from the side, rather than head-on. We will be happy to offer advice, however the final decision will be made by your designated contact. Subsequent to the release, we will retrieve any equipment and leave as unobtrusively as possible, unless otherwise arranged or requested.

All releases will be overseen by an experienced release professional, who will be appropriately attired for the occasion. For memorials, this will mean a black suit or dress: For weddings or other events, lacking any other instructions, the bird handler will appear in a lighter colored suit or jacket and tie (M), dress or slacks and blouse (F). You may request alternate attire should you please, we are happy to accommodate requests ranging from white or black tie to casual clothing.​

In general, the birds are far hardier than we humans. While these birds have grown up and trained in the Portland Area, we always keep in mind that we are transporting them to an often unknown place, letting them out a couple of hours before dark, 40 odd miles from home, with nothing but the feathers on their wings and an “Off you go, Boys and Girls”. Summer is fun; winter may be not so much. Each day, our birds have the option to fly or to stay in the loft and the majority of the flock will almost always elect to go out. There are, however, some limitations. High winds (25-30 mph plus), heavy rain, thunderstorms, dense fog, hailstorms, heavy snowstorms, with reduced visibility will ground most light aircraft; our birds will be grounded too.​

When making the appointment, you will be asked to supply an event starting time and a release time. We understand that times may slip a little, and therefore will be prepared to release up to 30 minutes after the scheduled time. Depending upon the time of day, and our prior commitments, additional waiting time MAY be available at a cost of $25.00 for every additional half-hour or portion thereof. We often schedule more than one event per day in the busy season: we will not miss our scheduled appearance at another person’s event due to a delay in the current event. In addition, long delays may not be advisable from the bird’s standpoint – they are currently confined to small cages, and are quite hungry and thirsty.

Cancellations made before confirmation and payment of the remaining balance will forfeit the non-refundable reservation fee. Cancellations made after confirmation and payment of the balance will be refunded 50% of the total fee. Bright Eyes Dove Release will attempt to re-book the cancelled date at a discounted rate. If successful, Bright Eyes Dove Release will refund all monies received excepting the original reservation fee.